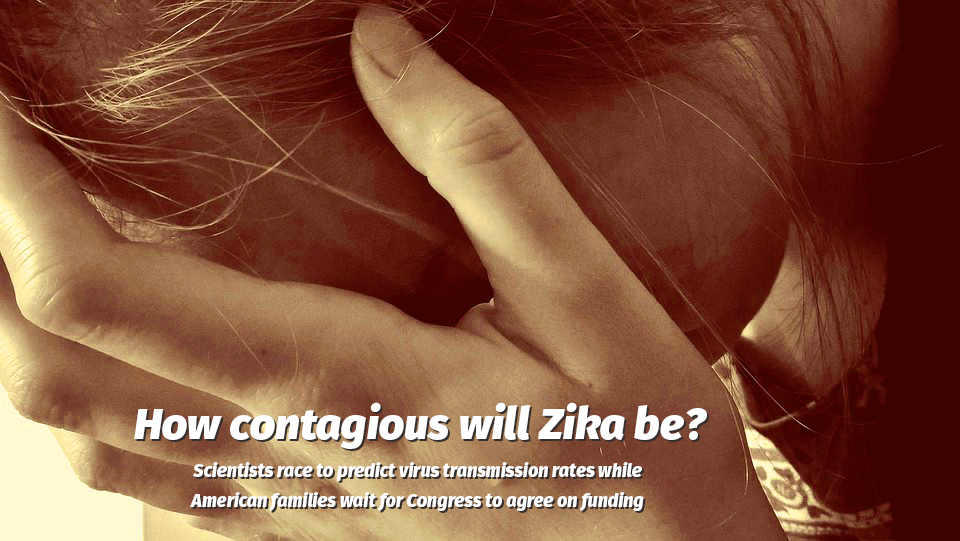 With recent news confirming that Zika causes birth defects, U.S. health officials are understandably concerned about the potential effects on American families.  Chances are good that Zika will start spreading across the United States, promising grim outcomes if the threat is ignored.  The one thing everyone wants to know now?  How contagious will Zika be? 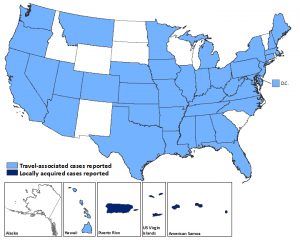 Zika transmission in the U.S. and territories as of April 2016, provided by the CDC

The CDC has reported 475 Zika infections in the Samoas, Virgin Islands and Puerto Rico, 471 of which were transmitted by local mosquitos; and 201 cases in Mexico, many of which were also locally transmitted.  48 of these cases were in pregnant mothers.  As of April 13th, 2016, there have been 358 confirmed cases of Zika found in American citizens, 31 of which were pregnant at the time.  The largest amount of U.S. Zika cases have been reported in Florida (82), New York (54), California (29), and Texas (27).  Thankfully, there have been no confirmed locally-transmitted cases within U.S. borders.  However, with Zika’s ability to spread through bodily fluids and sexual contact, the fast approaching warm weather, and the fact that Zika-carrying mosquitoes are found in more states than previously thought, greater numbers of transmission seems unavoidable.

How Contagious will Zika be in the U.S.?

While the United States will face different challenges than other affected countries, scientists can still predict how Zika will act as it spreads across America by looking at two factors: how Zika has behaved in other parts of the globe, and how more well-known viruses in the Zika family have behaved in the United States.

Researchers have already predicted Zika’s behavior once before, in Columbia.  They achieved this by studying the average number of cases one original infection causes over the course of its infectious period.  By taking this basic reproductive value of the virus, or “Ro,” scientists can determine whether a virus is likely to run rampant throughout a population.  The bigger the Ro, the harder the disease is to contain.

Zika’s Ro value in Columbia is between 3 and 6, which means that one case was typically spread to about 4 other people during the original patient’s infectious period.  Other viruses with a value of 4 include SARS and HIV.  The Ebola virus only had an Ro value of 1.5-2 at its most critical point- meaning the Zika virus has the potential to infect far more victims than Ebola claimed.  Of course, Zika is also far less dangerous to the majority of the population than Ebola, and it requires a certain breed of mosquitoes to spread, so the higher rate of infection isn’t quite so scary when scrutinized with a logical eye.

Still, this high Ro value explains why Zika has spread so quickly and so far, and why the medical community is urging the American government to approve large swaths of funding for serious mosquito prevention tactics.

Dr. Scott Lillibridge, epidemiologist at the Texas A&M Health Science Center, agrees.  “An Ro of four tells you need to move fast, early on in an outbreak, to break transmission,” he stated.  “Zika’s effect on unborn children is devastating.”

Since Zika cannot be transmitted by every type of mosquito, and the mosquitoes that carry Zika only live in particular climates and elevation levels, Zika’s Ro value is largely dependent upon environment.  A self-limiting vector gives those fighting the spread of the disease a bit more room to breathe.

Behaviors of Viruses Similar to Zika 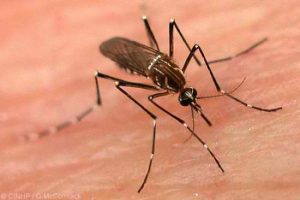 The dengue virus is related to Zika and spread by the same breed of mosquito.  A dengue epidemic in the right conditions also behaves like Zika with a nearly identical Ro value of 3.

Like Zika, dengue fever outbreaks are heavily dependent on environmental factors such as humidity.  In a country with hot, wet weather like Thailand, dengue outbreaks are frequent, reigning as one of their main public health concerns.

The largest recorded outbreak of the decade reported 11,432 cases of dengue in 2013 in Thailand, although the real number of infected individuals (many of whom went without reporting) is presumed to have been much higher.  A study on the impacts of climate on dengue fever transmission by Sittisede Polwiang determined that this large outbreak was caused by a perfect storm of environmental factors favoring dengue’s primary vector- the Aedes aegypti mosquito.  Heavy rainfall provided abundant breeding grounds for mosquitoes, causing an exponential explosion of egg production which peaked in the middle of the rainy season.  Steady temperatures in the 82-84° F range allowed dengue transmission to sweep across large urban areas, infecting high amounts of victims at one time.  In turn, the high amount of infected victims further compounded dengue’s viability, as they overwhelm the available healthcare resources.

However, the tropical climate of a place like Thailand is vastly different than many of the climates in America.  Diseases like dengue or Zika won’t spread as easily in the Northern Hemisphere.  Why?  While Brazil was facing a severe outbreak earlier this year, much of the United States was still blanketed under heavy snowfall.  Even as temperatures climb, states in the Northwest and High Plains regions that experience drier, cooler summers will not support large mosquito populations, and should therefore not see a large Zika outbreak.  This explains why the most frequent occurrences of Zika infection have presented in humid, subtropical Florida.  Historically, the United States has experienced very few outbreaks of dengue fever, and researchers expect much of the same from Zika.

With Less Risk, will Congress Approve Funding for Zika Prevention?

Though there may be less risk to the United States public than those living in South and Central America, no one can deny that something needs to be done.  Unfortunately, research and prevention for a disease with no vaccine requires funding, and a lot of it.  President Obama and Congress are now locked in a furious debate over the budget.  Intelligent predictions aside, steps forward remain unclear.  Exactly how contagious will Zika be, really?  That’s the question halting progress.

White House Press Secretary Josh Earnest places the blame on uncooperative representatives.  “Congress has completely abdicated their responsibility to follow through on a proposal that the administration put forward,” he stated.

However, the Republican Party hasn’t turned a deaf ear to the medical community.  Utah Republican representative Chris Stewart is sponsoring The Zika Response and Safety Act, a bill to allow the government to use $1.8 billion in funds set aside for Ebola research to also fight and prevent Zika.

“The Zika virus is a global health threat that requires our immediate attention,” Stewart said. “This bill gives agencies like the National Institute of Health and the CDC the resources and flexibility they need to research the virus to develop treatments and vaccines. Experts fear that the virus will spread more widely to the United States, especially with the Rio Olympic Games on the horizon,” he said.

Stewarts proposal came on the back of the President’s request to Congress for $1.9 billion to fight Zika with preventative measures like mosquito control and to fund the development of a working vaccine.  Congressional Republicans weren’t convinced that Obama’s request was necessary, stating that only $500 million of that total was going to be spent directly on Zika.  Stewart insists that his bill will adequately cover present funding needs and get money in the hands of researchers much faster.

“It’s good for two reasons,” Stewart continued.  “As I said we’re able to save money, but it also is much faster. We’re able to move that money immediately rather than go through the entire appropriations process which would have taken months.”

So far, the President has earmarked $600 million of these funds for Zika research.  However, current administration warns it’s not nearly enough.

“Republicans are going to look back on this time that they’ve had to act on the Zika virus and deeply regret it,” Earnest said.

Only time will tell which side is right.