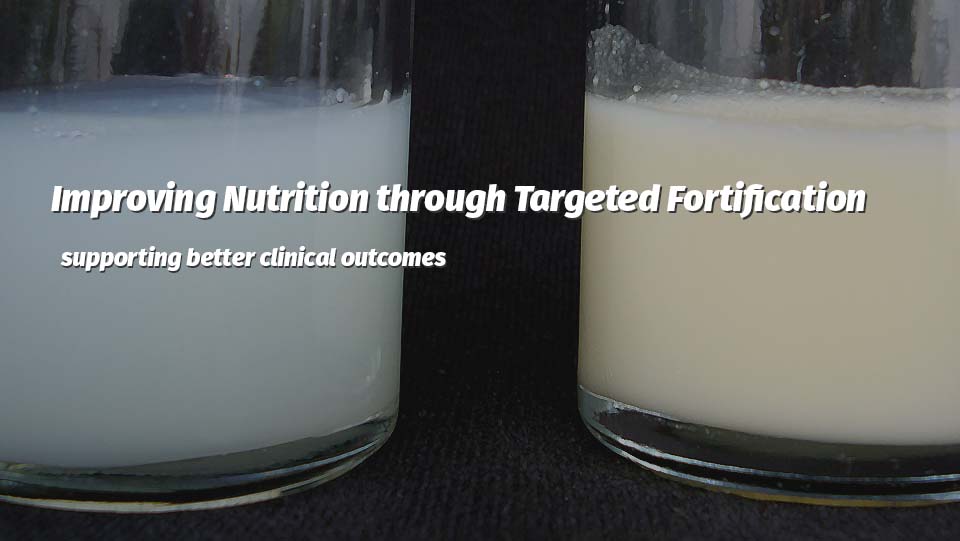 The composition of human breastmilk, while sharing certain similarities, is still a highly variable between different mothers.  Even when you consider different breastmilk samples from the same mother, you will find its composition changes depending on what time of day the sample was taken, and the length of time it’s been since she’s given birth.  While most full-term babies can happily subsist on just about any (pasteurized) breastmilk or formula given to them, preterm babies are another case entirely.  Many preemies have stomachs the size of thimbles, and are too weak to eat for very long.  This means that preemies can’t get the nutrition they need by drinking a greater volume of milk.  In order to optimize the growth and clinical outcomes of premature infants, research suggests that each bottle of human milk should be analyzed to determine its current composition, and then fortified to make up for any nutritional deficits or individual needs.

Sumesh Parat, MD of Pediatrics at the MetroHealth Medical Center in Cleveland, recently published a study on the eﬀects of targeted fortiﬁcation of breastmilk and formula when fed to premature infants in the NICU.  Paragon explores why the Metro Study was successful, and what that means for preemie patients.

When it comes to treating preemies, accuracy is important. Premature newborns typically have underdeveloped, immature digestive systems, which makes eating diﬃcult. While breastmilk is an unquestionably beneﬁcal source of nutrition, it cannot meet the increased nutritional demands of a rapidly growing preemie. In fact, most doctors recommend that preterm babies receive about four times more protein per feed than a full-term baby. But when the simple act of eating is an exhausting ordeal, preemies can’t get this extra nutrition by consuming more milk. Instead, neonatalogists must be able to fortify small amounts
of breast milk or formula to pack more nutritional punch into every feeding. This is achieved through the process of human breast milk analyzation.

Does targeted fortiﬁcation provide more protein and growth beneﬁts to preemies? The Metro Study sought to prove that by using targeted fortiﬁcation, NICUs can accurately meet the nutritional requirements for protein of 4g/kg/day for infants with very low birth weights (VLBW) and extremely low birth weights (ELBW) in the Neonatal ICU. Since standard fortiﬁcation methods provide only 3.09g/kg/day of protein or a 25% deﬁcit, a favorable outcome seemed likely.

A control group was fed using standard fortiﬁcation, and a test a group was fed using targeted fortiﬁcation as described above. The two groups’ body compositions were measured using air displacement technology and skinfold thickness to ensure an accurate starting ﬁgure. 30 mL of breastmilk from the infant’s mother or a donor was taken once every week. The protein composition of these samples were analyzed using the Calias spectroscopy infrared Analyzer and used to set a fortiﬁcation plan. Both groups were fed a standard dose of milk fortiﬁer, 1 packet per 25mL of breastmilk, as well as additional
protein to ensure they all received 4 grams per day.

Patients that received targeted fortiﬁcation for 30 days or more demonstrated a statistically relevant improvement in lean muscle mass and a trend for an increase in length. By using targeted fortiﬁcation, NICUs can accurately meet the nutritional requirements for protein of 4.00g/kg/day for VLBW and ELBW infants in the Neonatal ICU. Standard fortiﬁcation methods provide only 3.09g/kg/day of protein or a 25% deﬁcit. Overall, the Metro Study proved that fortiﬁcation resulted in expected or improved growth rates, and the patients treated did not require catch up nutritional therapy. There were no perceived
negative eﬀects. 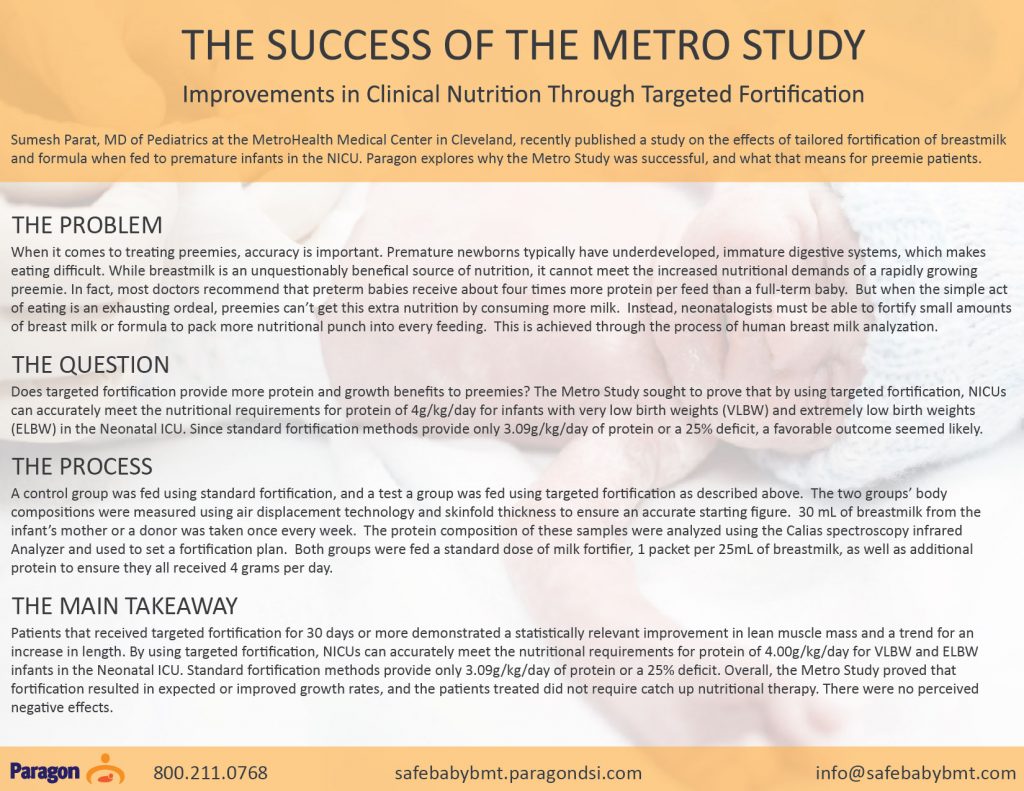 Click to view a visual summary of the Metro Study

It’s clear that the success of the Metro Study oﬀers enhanced treatment options to preemie patients. But how can NICUs implement eﬃcient fortiﬁcation methods? The SafeBaby system from Paragon has pioneered eﬀective protocols for validated, comprehensive nutrition.

SafeBaby allows nurses to scan the date and time of the breastfeed and send this information back to the hospital’s EMR systems.  Other systems aren’t capable of this type of automated reporting.

SafeBaby ensures that the milk used for oral care was pumped by the infant’s mother. Currently, we are the only system to
oﬀer this functionality.

SafeBaby is the only system that automatically changes the expiration times when milk is moved from freezer to fridge,
when it is poured into a new container, or when it is fortiﬁed.

Unlike other systems’ ﬁll processes, which are manual, SafeBaby automatically changes the volume of bottles and syringes
during our ﬁll process.

Comprehensive inventory tracking: SafeBaby is the only system to track the location of all formula and donor milk in the NICU, an essential ability in case of a sentinel event.

SafeBaby oﬀers Clinical Administrators over 20 diﬀerent reports, which are fully customizable to a hospital or donor bank’s needs.  Other solutions do not oﬀer such extensive reporting.

Our system is the only breastmilk tracking application that can read both Mead Johnson and Abbott Ready to Feed bottle barcodes.

SafeBaby can read HMBANA, Prolacta, and Mother’s Milk Cooperative barcodes. As of today, no other system has this capability.