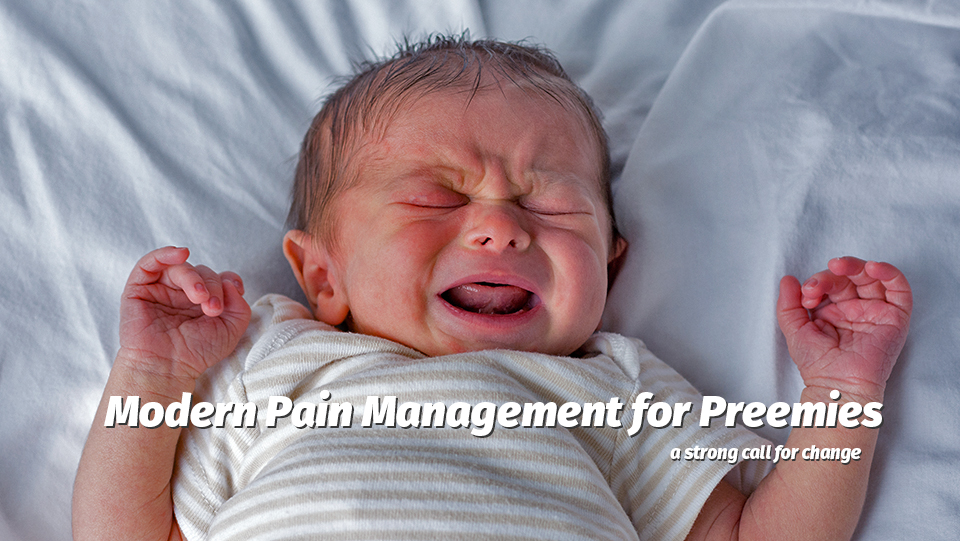 Pain management for preemies has always been a matter of heated debate for neonatal professionals.  Thankfully, the long-held belief that premature children are too young to register pain may soon be officially debunked.  As recently as the 1980’s, many medical professionals insisted that the brains of preemies are too underdeveloped to recognize and remember the feeling of pain.  Doctors were sure that the benefits of anesthesia were outweighed by the extreme danger of putting such a delicate child in a temporary unconscious state.  Life-saving operations were often performed without any pain relief whatsoever.

Developing Pain Management for Preemies: A Medical Trial by Fire

Thanks to doctors like Kanwaljeet Anand, who sought to address pain tolerance and pain management in preemies during medical trials some 30 years ago, most NICUs are now committed to striking a better balance between using too much medication and not using it at all.  Anand’s 1987 paper, titled Pain and its effects in the human neonate and fetus, demonstrated that unpleasant stimuli caused stressed responses in preemies, responses which impacted healing and in some cases, may have decreased survival rates after serious surgical procedures.  He insisted that neonatologists had to weigh the risks of using anesthesia against the risks of causing the baby to feel stressed or go into shock when administering treatment.

Anand concluded that “humane considerations should apply as forcefully to the care of neonates and young, nonverbal infants as they do to children and adults in similar painful and stressful situations.”

More modern studies support Anand’s findings, showing that repeatedly experiencing too much pain, even during very necessary treatments meant to help them survive, could cause the child harm.  Feeling large amounts of pain as a newborn can affect brain development, restructure nerves, and influence behavioral issues like hypersensitivity during childhood and even suicide or depression as an adult.  Many insist that common pain cues like flexing limbs, cries, and the corresponding dip on the child’s heart rate monitor prove that neonates feel and are affected negatively by pain.

So then, why is it still so controversial to provide pain management for preemies when the issue seems cut and dry?

Unfortunately, it’s not.  Determining acceptable levels of pain in the NICU continues to be an unpleasant but necessary catch-22.

“Pain assessment can be a significant challenge in preemies,” Erin Keels, newborn specialist and nurse at Nationwide Children’s Hospital in Columbus, Ohio, explained.  Since pain is subjective, it’s not as easy to tell whether a nonverbal preemie is merely uncomfortable or truly in need of a sedative.  And with multiple preemies being treated multiple times a day, it would be a monumental task for harried nurses to overlook life-threatening situations to try and decipher whether one patient needed medication every time, or indeed, for nurses to administer that much medication on such a frequent basis.

Why?  A hospital’s reluctance to medicate preemies isn’t a matter of cutting expenses or a lack of empathy- it’s a question of acceptable risk.  Research shows that using morphine and other opioids on neonates can seriously derail their recovery.  Slowed heart rates, low blood pressure, and drug dependence are common unwanted side effects.  In extreme cases, the weight gain that preemies desperately need to survive crawls to a halt or barely limps along.  Some preemies end up with drastically smaller head sizes or the behavioral problems doctors were hoping to avoid in the first place.

“While we want to manage pain appropriately, we also have to pay attention to not going too far in the other extreme,” said NorthShore Evanston Hospital’s NICU medical director, Dr. William MacKendrick.

What Does the Future Hold for Preemie Pain Relief? 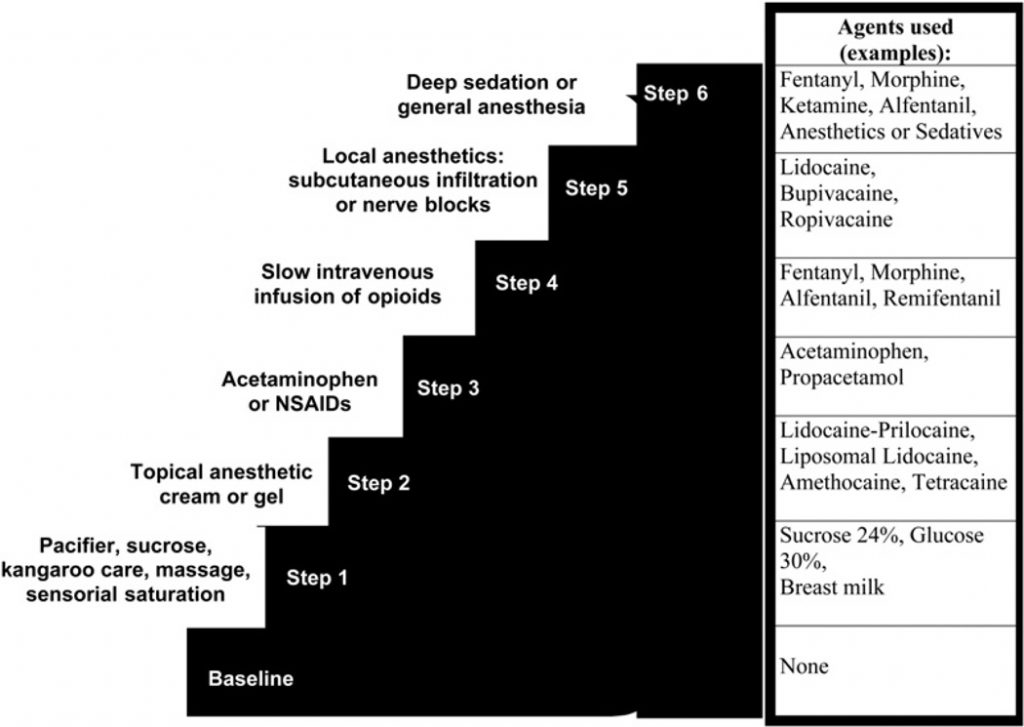 Suggested “stepwise” approach for pain management for preemies from Dr. R. Whit Hall’s Anesthesia and Analgesia in the NICU

While it’s still not clear whether traditional medication is appropriate in the NICU, it’s obvious that current methods aren’t enough.

Some hospitals have been experimenting with opioid-free strategies, like giving the baby a sugar-dipped pacifier or swaddling them during a procedure.  Asking the child’s parents to administer Kangaroo care after a scary or painful treatment also seems to help calm and soothe stressed preemies.

Nearly all NICUs have adopted a “stepwise” protocol that gradually increases pain relief methods as needed, so that opioids are a last-resort.  An example of such a system can be seen outlined in Dr. Hall’s 2012 paper Anesthesia and Analgesia in the NICU.  Newer, more accurate methods of measuring neonate pain are also being tested, such as studying their brain waves and the electrical impulses running up and down their skin.

The American Academy of Pediatrics, the National Perinatal Association, as well as many independent doctors, nurses, and researchers have called for continued exploration into alternative pain management for preemies as well as a greater parental involvement in day-to-day NICU activities.