How your neonatologist can help you face the unknowns of necrotizing enterocolitis. 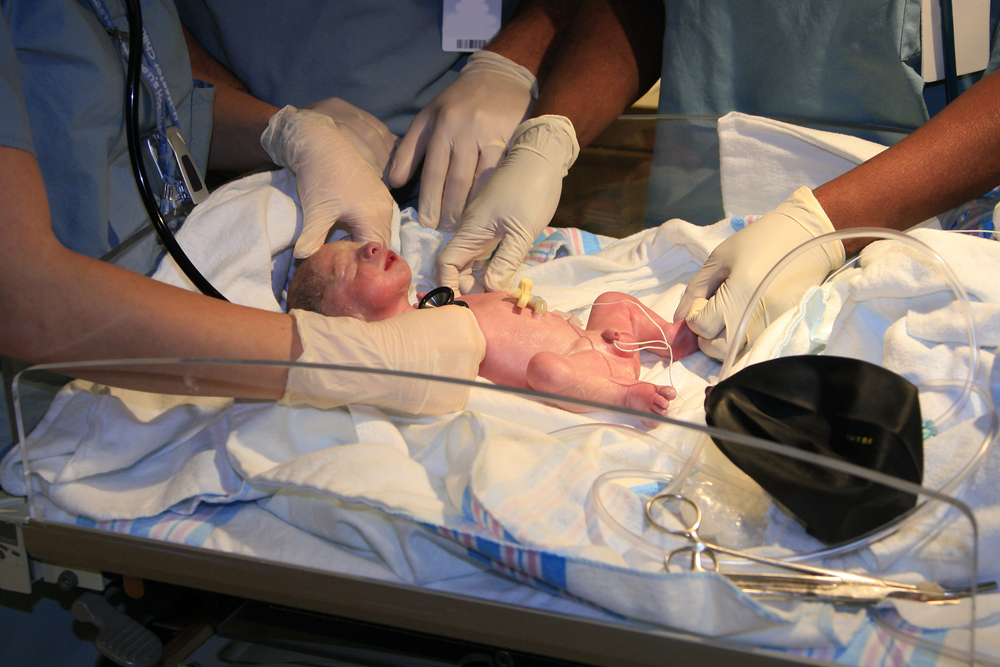 Necrotizing Enterocolitis, or NEC, is a tissue injury most common in premature infants.  Characterized by an inflammation of the large and small intestines, NEC causes infection and destruction of the bowels in newborn children.  Common symptoms include abdominal bloating, redness of the abdomen, fussiness during feedings, vomiting, and bloody feces.  Neonatologists will usually confirm the diagnosis of NEC through a simple X-ray of the GI tract, where abnormal gas patterns, large veins in the liver, or air pockets outside of the intestines indicates the disease.

Affecting only 1-5% of patients in the NICU, necrotizing enterocolitis is nevertheless the most common gastrointestinal disorder among hospitalized preemies.  Out of all hospitalized underweight babies (babies weighing less than 3 pounds), about 10% will develop NEC.  These infants are at such an increased risk for this disease because they are born with an immature digestive system, and cannot handle sudden changes in blood flow or processing their own food.  Sadly, these difficulties often lead to inflammation and subsequent infection of the bowels.

Necrobiosis, the preprogrammed cell death of all healthy living beings, begins at the moment of birth.  From the time of our first breath, our cells are in a constant state of growth and destruction, existing tissue being replaced by identical cell types when their life cycle is over.  Most of our cells turnover millions of times every day, an automatic process so common we don’t even realize it is happening.

Sometimes, cell death happens before they are completely mature, an inflammation called necrosis.  Once living tissue dies, there is nothing that can be done to reverse the process.  If the body cannot get rid of the dead tissue itself, bacteria are attracted to the site of the wound.  This is why many cases of necrosis can become fatal, as dead tissue will begin to rot and can lead to a serious infection if left untreated.

Necrotizing enterocolitis, or NEC, stems from a similar type of tissue injury.  While the exact causes of NEC are not yet known, neonatologists suggest that the infant’s intestines are weakened by inadequate oxygen and bloodflow.  The condition usually appears soon after a preemie is weaned off of intravenous tube feedings and started on regular milk supplementation.  When food begins moving through the delicate GI tract, the added stress and irritation allows too much bacteria to build up on the walls of the intestines.  If the bacteria invades beyond the intestinal wall and leaks into the bloodstream, the baby can develop intestinal holes, dangerous mineral imbalances, or even peritonitis.  Preemies who are fed man-made formula seem to be at increased risk for NEC, although breast milk can cause just as serious of an infection.  Other factors that may cause inflammation include complications during the delivery which limit a preemie’s bloodflow, diverting oxygenated blood away from the intestines to supply the more vital organs; or polycythemia, a disorder which thickens the blood so that it can’t easily be transported through the GI tract.  Surprisingly, NEC often behaves like an epidemic, affecting several different patients in one nursery.  Neonatologists aren’t sure if the disease can indeed be spread from one case to another, which is why following proper feeding regimens are so important.

How Do You Treat NEC?

No matter how a baby develops the disease, necrotizing enterocolitis is often easily treatable without the use of surgery, requiring only nasogastric drainage, a round of antibiotics, and a cessation of milk feedings for at least a 72 hour period.  Most babies can resume a normal diet about 10 days after starting their medication.  Severe cases may require surgical removal of part of the intestine or a stoma.  While children who have undergone bowel removal may suffer from nutrient malabsorption, the majority of affected infants fully recover from NEC with no further health issues.

Some parents may find it difficult to deny their child milk during their treatment.  Whether you choose to use breastmilk or formula, holding and feeding your baby is a bonding experience that is naturally important for a new family.  However, premature newborns in critical care are often unable to participate in traditional parent-child activities until they’ve begun their recovery, a frustrating limitation for families in the NICU.  This is where the emotional, as well as medical support of the NICU nurses becomes so important.  Parents of NEC preemies can greatly aid their child by learning about feeding techniques as well as practicing beneficial therapies like kangaroo care.  Talking with a neonatal medical professional is the best way to understand necrotizing enterocolitis and plan for your child’s future care.